I am a mother, skin black as night--

Sitting, waiting nervously outside my home.

Worried for my sons,

Worried that colourless ghosts will snatch them

to the coast and gone forever.

The nights are long and the waits are agonizing…

I am a mother, skin brown as the tobacco I pick--

sitting, waiting nervously outside the quarters.

Worried for my son,

worried that he stared at slavemaster’s wife too long

or not long enough,

that his politeness would not make up for his blackness,

worried that slavemaster will snatch him

I am a mother, skin still too dark for a paper bag test--

Worried for my son,

Worried that he looked like too much of a threat

that he looked like too easy of a target

that his neck looked like a good fit for a noose,

Worried that nightmares dressed in white

with pointy hats will snatch him

I am a mother, skin don't matter just know my son is black.

I sit, waiting nervously, listening to the news.

Worried for my son and yours,

worried that he looked too black, too scary

that he wore his hoodie up to get skittles

that he went to church and welcomed a stranger

that he jay walked or ran a stoplight,

(We don't let him play with toy guns anymore)

Worried that men in blue will snatch him

or let him die by the hands of another white man.

The nights are still so long and the wait is still so agonizing.

I am not a mother

and I do not think that’ll ever change,

nor will the worry or the fear.

I am a sister and I am afraid.

I am a black female and I am tired of the wait. 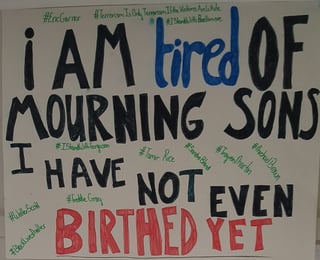 Periodically students volunteer or are asked to write for the Stoneleigh-Burnham blog.