Two days after the ISIS attacks on Paris (and three days after the ISIS attacks in Beirut), I received the following email from a seventh grader: “If we have time in class tomorrow, I really think we should notice/talk about the attack by ISIS in Paris that happened Friday Night. I feel like we should have a moment of silence.” I wrote her back and said, “I've been thinking about what I might want to do with you all, knowing someone might bring it up, knowing I maybe should bring it up if none of you all do. Thanks for writing me now as it will help me in my thinking. A bunch of us SBS teachers, including Miriam and Mme. Jolicoeur, have been talking about it and sharing resources, and many of my teaching friends at other schools are doing the same thing.”

Kids may or may not ask for this support as directly as did this student, but kids do need support at times like this, though perhaps shown in different ways for different kids. José Vilson put it well when he said, “Hoping educators are paying attention. In times of tragedy, kids generally look towards adults who they're already learning something from.” Josie Holford of Poughkeepsie Day School shared “two helpful resources for talking with children about tragic events” which I passed on to the faculty, and Ellen Carter, our school counselor, shared additional resources (since reshared in a letter from Sally to the greater school community). I shared Josie’s resources with some of my colleagues in the MiddleTalk Facebook group, and we had a short discussion there about how best to go about handling the discussion, including the need to mention ISIS attacks in Beirut just one day previously. And I had numerous discussions on Twitter, including a particularly rich one with Shannon Carey, who later shared a blog she’d written on the topic.

Yesterday, the student who had written me opened the class by making an announcement, and we had a good discussion in which they shared what they knew, deconstructed a few things that needed more critical examination, asked questions, and generally worked to understand both how these events could happen, how they could be avoided in the future, and how we would know we are safe. This last question, of course, is one of the hardest, and I responded by assuring the student who asked me that I am always scrupulously honest and so I can’t legitimately say the risk is zero, but that there were any number of reasons why we can still find ourselves able to feel safe. We talked, too, as Mr. Rogers suggested, about the helpers - the statements of sympathy from President Obama and Iran, the residents of Paris who literally opened their doors to strangers in need through the #porteouverte hashtag, the people in Beirut and Paris who lined up at hospitals to give blood. The students themselves wanted to do something, and settled on making cards to send either to the President of France or to victims in hospitals.

So often, kids feel they are still too young to make a real difference in the world. When Sita and Asoke Thapa came to talk to us about their schools in Tibet and the ongoing effects of the earthquake and students asked what they could do, Mr. Thapa gave them a few concrete ideas and also told them not to underestimate the power of positive thoughts, even from afar. I feel the exact same way.

So I find myself imagining the moment when a random handmade card from a random school in the U.S. arrives at a hospital in Paris. Perhaps a nurse will look at it and think which patient might be most cheered by it, or perhaps they will tape it to a wall for all to see. No matter what, though, the world will be a kinder, more positive place as a result, and the better for it. 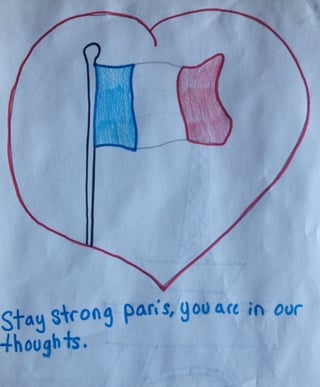 I imagine that moment, I pull up a mental image of my students sitting around a table with markers and paper, and I smile. Maybe there are no guarantees in life. But unquestionably, there are also moments like this.