Intersections: On being kind

The Good night, everyone part is self-explanatory (though I did on one occasion expand it to the full  “Good night. Sleep tight. Don’t let the bedbugs bite. And wake up bright in the morning light to do what’s right with all your might” version I learned as a teenager).

The #Coexist part, on the other hand, has been challenged directly by friends who wonder how you “coexist” with people who have no desire whatsoever to coexist with, respect, and in some cases even recognize the existence of entire demographics. I understand where they are coming from, and as such our conversations on the topic have always been mutually respectful. But I’m not dropping it.

Richard Lakin, whose Twitter handle was @Thanks2Teachers and who was one of the kindest people you could hope to know, used the well-known “Coexist” graphic on his page and literally lived and died coexisting. He was a former Freedom Rider and, upon his retirement as a beloved school principal, he moved to Israel to work with programs bringing together Israeli and Palestinian children. He was brutally attacked in a public bus by terrorists and died two weeks later. I keep the hashtag in his honour as a way to keep alive both that idealism and that willingness to put ideals into action.

As for the #EverydayKindness part, this too has been challenged in a sense, though not directly and not specifically to me. But I definitely see people out there questioning kindness as an ideal, and it makes me think.

If you’re thinking of the version of kindness that is really just a synonym for niceness, I totally get it. “Be kind!” can be and has been used to shut down conversations that really need to happen, for example about racism and other forms of bigotry. Acts of random kindness, while they definitely serve us well by creating a context where we can readily see the good in people and use that to renew and refresh ourselves and keep hope alive (and as such, I do engage in them), don’t push us to do the deeper work necessary.

When I write #EverydayKindness, I’m definitely thinking of that deeper work - not just doing something nice in the moment but actively working to transform the world, as much as humanly possible, into an overall, genuinely, kinder place. Being empathetic. Acting out of and for the basic humanity and right to respect and dignity we all share. Acting, in short, out of love. And along with that, being willing to do the personal and community work necessary for our own growth in reducing and, ideally and if possible, eliminating both the prejudice in our society and the inevitable and undeniable effect on us of absorbing that culture.

It’s International Kindness Day and, for good reason, Fred Rogers is frequently being invoked. So let’s let him have the last word: 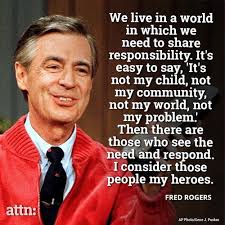