On Saturday, I went to see an advisee play the part of Rosalind  in a youth production of "As You Like It." As I watched her on stage, I noticed her strong vocal projection, her remaining absolutely in the moment with her lines, altering her vocal tone and emotional pitch even within a sentence if need be. I watched her match facial expressions to vocal emotions, and I watched her move confidently about the stage. I loved it all. 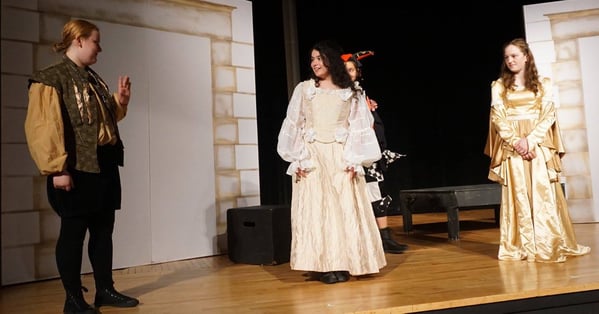 Additionally, it was wonderful to see how thoroughly the kids in the group were committed to each other and to the roles they were playing. The group, Young Shakespeare Players East - New England, uses a model where kids of any age are welcome and given genuinely meaningful parts. For “As You Like It,” this meant kids aged 7-18 were grouped into three different casts, each of which had the same number of performances. Kids learn how to give feedback to each other, and this becomes an integral part of the process of creation. It was touching to see how, even as the younger kids looked to the older kids for support and the older kids looked out for the younger kids, they saw each other as equal members of the theatrical team.

Recently, I began an amazing and ongoing conversation with Nat DiMario, a former student who is also deeply involved in theatre, about collaboration and how people learn it. Among the wisdom they shared with me about which I’ll be thinking a lot this summer as Nat and I continue our conversation:

I think an important aspect to teaching collaboration is allowing the students/collaborators to try to collaborate independent of an outside force (aka a teacher or advisor or director who will step in to help if need be) - and allowing them the opportunity to fail at it until they've figured out how to work together.

The director of Saturday’s production, Susanne Rubinstein, is also my advisee's mom, and she agreed to sit down and talk to me this summer about how she builds such a high level of collaboration with the casts of her productions. I am so grateful for both conversations.

Next year is a "formal evaluation" year for me. Not only have I added an important new explicit focus on which to work, but also I've already tapped into two amazing resources.

How lucky am I?