As I pulled into the parking lot of Target in attempt to find a yellow T-shirt for our Spirit Week Colour Wars skit, my phone beeped to tell me I had a text. It was Jeff Conlon, our Athletic Director, asking me if I was watching the Olympics and quoting one of the announcers. It turned out they were talking about the women’s downhill race and the tough course, and focusing on how strong and skilled and athletic the racers were...

Just kidding. The actual quote Jeff texted me was “Maybe a bit of makeup” and it turned out the announcers were, surprise of surprises, focusing on how the women looked and what they were wearing. I couldn’t disagree with his comment, “horrible,” even if I had wanted to. Which I didn’t. As he added later in our text-conversation, “Talk about taking the focus off the amazing athletic accomplishments and making them into ‘girls.’”

Though I was certainly angry to hear of this blatant discrimination, I wasn’t particularly surprised. Indeed, shortly after my texting chat with Jeff, my Twitter feed brought up a tweet stating an official complaint was being lodged with the BBC about their treatment of silver medalist Torah Bright, as they had commented that she is “nice looking,” “feminine,” and “the full package.” (quoted by Diedrichs) In addition, on the day the Olympics were beginning, NBC posted this image on Facebook. 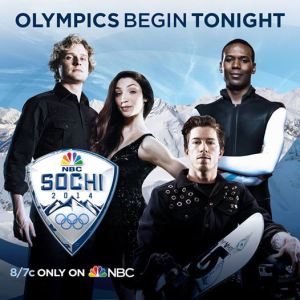 I originally took the figure skater’s costume to be an evening gown, but in my defense, while the three men look serious and confident, she is smiling and is standing in a somewhat sexualized posture. Plus, as my mother-in-law pointed out, she presumably also owns a winter jacket.

Earlier in the day, I had come across an article entitled “Medals Aren’t Enough: Female Olympians Still Have to Sell Sexiness.” “Have to?” I thought to myself. And clicked on the link.

With a sense of inevitability, I read, “For male athletes, it’s primarily about their performance. And for female athletes it’s definitely as much about their looks as it is about their performance.” (Adler, quoted in Dockterman) I was saddened to learn that the WNBA offers makeup seminars to rookies, and that “women who compete in sports that require helmets are spending 30 minutes in front of the mirror putting on makeup before competition preparing for their HD close-up when that helmet comes off at the finish line.” (Dockterman) And of course, whatever their sport and uniform, female athletes far too often end up posing in bikinis or other revealing clothing. And as if all that wasn’t bad enough, Ashley Wagner was accused of having only made the figure skating team because of her looks. Women, it seems, have to hit a fairly precise target in terms of appearance, a task that almost makes biathlon look easy.

As Jeff said near the end of our chat, “The system is skewed.” I am well aware, of course, that this isn’t just the sports world - indeed, as I was writing this blog, the New York Times tweeted a link to a desperately important article on a major issue of our time, “A new kind of cleavage ideal on display at the awards shows.” But that doesn’t excuse sports announcers and reporters, nor does it excuse advertisers. It really shouldn’t be that hard to focus on female athletes' accomplishments.

Because they’re good. Better than good. They’re quite literally world class. They deserve to be treated as such. And my students who love sports and are perpetually frustrated as they repeatedly bump up against the reality that, outside of the Olympics, only 4% of sports programming is devoted to female athletes, they deserve more as well.

The #NotBuyingIt campaign has proved remarkably successful in causing Super Bowl advertisers to cut back sharply on the level of sexism in their ads in just the past two years. They have shown that grassroots activism can be incredibly powerful. Perhaps we need a similar effort to reshape TV programmers’ thinking. Perhaps, too, it would help to get more women involved in advertising (where only 3% of creative directors are women) and journalism (where only 6% of sports editors are women).

Ideally, sooner rather than later.