A Tale in Tweets, Posts and Photos.

We lost to Miss Halls and our record was 0-2-0. Luckily, it was early in the season so we had plenty of time to improve.

Good luck to JV Soccer against @BementSchool, Varsity Soccer as they take on @DarrowSchool and Varsity Volleyball against @thewinchschool!

Congrats to V. Soccer in their win against @DarrowSchool yesterday! Great job girls, keep it up!

Congratulations to the varsity soccer team on their win against Darrow School yesterday. Keep it up girls!

Our record continued to improve with a win over Darrow School and we took the lead in the league. With only a few more weeks of games, our record stood at 4-2-1.

Good luck to JV Soccer vs. @NMHSchool and to V. Soccer vs. @aactweet today! Bring home a win girls! #athletics

Our winning streak continued and we beat the Academy at Charlemont 5-2 and Buxton School 6-1. The girls were fired up and their announcements became more enthusiastic with each win. The varsity soccer team held a record of 6-2-1 with only a few games left.

Congratulations to our Varsity Soccer team in their 5-0 win against Dublin School yesterday. They play Putney at home at 2 p.m. on Saturday for the league championship. Come cheer them on!

Our win against Dublin gave us a record of 7-2-1 and the girls were ready to take on Putney for the league championship. They had high hopes of winning the game and (hopefully) the subsequent tournament and ending the season as league champions and tournament champions.

Congratulations to the Varsity Soccer team for winning their last game against Putney School (5-2) in the snow and becoming the RVAL regular season champs! Check out the video!

The win against Putney in the freak October Nor'Easter gave SBS the title of league champions. The girls were ready for the tournament and couldn't wait to play.

Congrats to V. Soccer team who will advance to RVAL semi-finals after 6-0 win against @buxtonschool today. Keep it up, girls! #athletics

Congratulations to our Varsity Soccer team on their 6-0 win against Buxton today. They advance to the RVAL semi-finals which will be played Monday at 3 p.m. Come cheer them on!

Varsity Soccer has done it again! Congratulations to the team on their 3-1 win vs. Charlemont in the RVAL semi-finals yesterday. They play for the RVAL championship vs. Putney School on Wednesday at 2 p.m. Go OWLS!

Going into the final tournament game of the 2011 season, varsity soccer boasted a record of 10-2-1. Spirits were high and the girls were ready for a fight.

Stoneleigh is first on the board! 1-0! yfrog.com/nywg8wrj

Still tied with @PutneySchool in the RVAL Championship soccer game. 1-1

We're going into overtime with @PutneySchool varsity soccer in the RVAL Championship game!

Into the second 5 minute overtime! Still 1-1!

Wow...we're heading into a shootout!

Congrats to @PutneySchool who are RVAL champs after the overtime shootout.

In the end, it was a tough loss for the Owls against Putney School. In spite of it, they had a winning season and finished as league champions. Perhaps the most heartening moment of the season came after the game had ended. As the students and guests from Putney School celebrated their win, our own fans, proud of their team and their school, ran across the field to support and encourage their peers. In spite of the loss, our fans were there to celebrate everything the team accomplished this season. Regardless of the final outcome of the game, they were proud of their friends and classmates. This is what Stoneleigh-Burnham is all about. 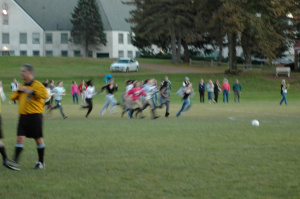 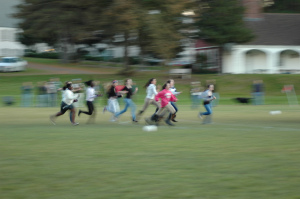 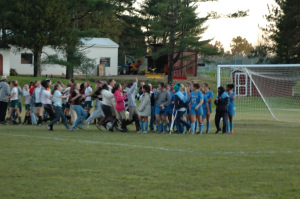